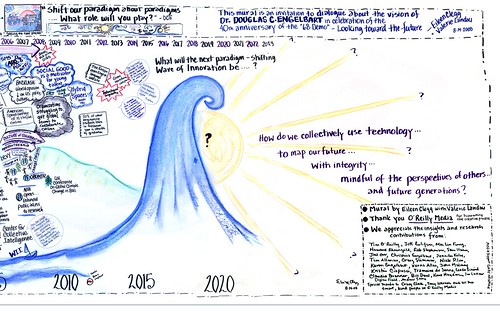 Last week has been rich with ideas for innovation on Twitter, this time with a national and international flavor. Just walking through a sampler of examples from several different conversations (AMA’s Equity Chat, the bioethics Twitter collaboration with the ASBH annual conference, international open access week, and capping the list with the BBC’s World Changing Ideas Summit).

I was riding the train home from Iowa, having visited my very ill father and feeling a tad distraught and fragmented, then stumbled into the AMA’s Equity Chat without a clue it was even happening. It just showed up in my stream, and I joined in. What a great chat about how to shift medical education toward a more diverse and inclusive community, and how doing so will benefit society at large, small communities, marginalized groups, and ultimately everyone.

Students learn from other students. Diverse culture at med schools adds to educational environment! Have something to add? #EquityChat now

What can medical schools do to attract and retain diverse medical students, residents and faculty? #EquityChat

@RWJF_Live Absolutely not. This is why we need to work harder to increase the pipeline into STEM and medicine for URM #EquityChat

Not that I haven’t seen this before, but shouldn’t EVERY major conference partner with a topically affiliated Twitter chat community during the conference to help engage a broader community in discussing the issues and pushing out important information and findings presented at the conference? We talk about translational medicine, but isn’t this a fundamental strategy for communicating core fundings to the audiences most likely to disseminate and implement them? Anyway, so the bioethics weekly chat teamed up with the American Society of Bioethics and Humanities for their annual meeting this week. I guarantee that a LOT more people noticed the conference than would have otherwise!

#ASBH14 do u think there need to be additional safeguards for decisionally/consent incapacitated to participate in research study? #bioethx

@nxtstop1 YOUR voice was included in our #ASBH14 presentation on #inclusion & #bioethics, check it out! #bioethxhttps://t.co/iwwmMYFS7M

While open access is not, right now, this year, a brand new shiny idea, it is still very much novelty historically and absolutely pivotal in promoting and supporting innovation. That was a big part of why the University of Michigan invited Jack Andraka to be the keynote speaker for our own Open Access Week events with the theme of Generation Open. These tweets are not just from Jack’s presentation, though, but also from other innovations taking place as part of OAW.

Diego Gomez faces up to 8 yrs in prison for sharing a paper online. Here's why he supports Open Access: https://t.co/n9wWllF8Rn #OAWeek2014

Allow kids in libraries. Allow kids into labs. Maturity factor, yeah, but show them science is about DOING! #OAWeek2014

The Equity Chat and Open Access Week both emphasize equality, diversity, and accessibility as essential components of innovation and positive change. Thus, it makes sense to also include tweets from the Ada Lovelace Day events, focused on awareness of women’s contributions to science and creating a vision of science practice that is inclusive of women and engaging to young women. And, speaking of innovation approaches, anyone else notice the incredible creativity and artistry of the efforts in this area? Wow!

She wrote the most important astrophysics PhD of the 20th century yet hardly anyone knows her name… pic.twitter.com/zDFs17MvJX

“That brain of mine is something more than merely mortal, as time will show.” — Ada Lovelance #ALD14 pic.twitter.com/x9rGzXPUmV

'When I look at my two year old playing with the ipad, I think, that's thanks to Ada.' #ald14 -Konnie Huq

For #AdaLovelaceDay treat yourself to the letters of one of Britain's greatest scientists: http://t.co/NiACjasPdi #ALD14 #realinsight

When I was taking AP Chem in high school, I learned a lot about Marie Curie. This #xkcd is one of my favorites #ALD14 pic.twitter.com/Ah8W9OKjqJ

I was so excited to discover the BBC’s new (hopefully annual) initiative to promote innovation and awareness of innovation: World Changing Ideas Summit. Aside from the tweets below, check out their collection of great posts and videos.

The first-ever World-Changing Ideas Summit has begun! Follow #WCIS14 & share your ideas on how to shape tomorrow. pic.twitter.com/ZcKbST0yN1

"I can build technologies that are secure to all users, or vulnerable to all attackers" @schneierblog #WCIS14

The internet is a borderless, nationless place. Art is no longer abt place and period.@alexisohanian @BBC_Future #wcis14

.@grok_ on stage at @BBC_Future #WCIS14 talking about her experiments where people are asked to torture robots: http://t.co/wPt1hTAsO4

'Why aren't we waking up every morning & reading a headline that 100 people died on US roads yesterday?' – Lawrence Burns #wcis14

Driverless cars as a vaccine against injury or death from car crashes. Powerful metaphor. #WCIS14 @BBC_Future

"Ideas come from everything, transform tomorrow. " thanks @BBC_Future for outstanding #WCIS14