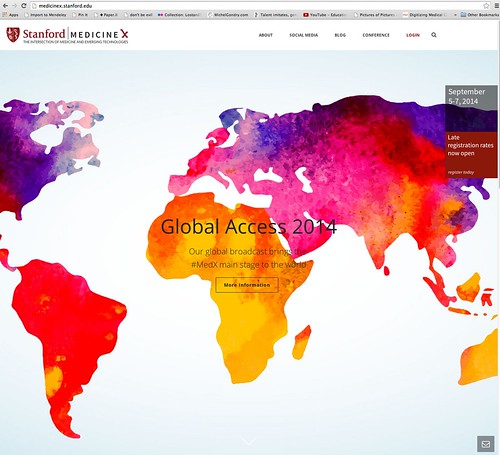 Medicine X started late last Thursday, and then ran for the next three days with a SOLIDLY packed program. I tried to follow as much as I could, in between kids, dogs, appliance deliveries, etc. I’m tired. But it was really awesome. There were a bunch of hashtags, but the core one was #MedX. There were, of course, presenters and participants from here, including Joyce Lee and Brian Stork, both of whom gave Grand Rounds on the University of Michigan campus last year. The livestream included what was on the main stage, so I wasn’t able to see their presentations, but there will be video in Youtube eventually. For today, I want to share some highlights from the almost 50,000 tweets over the four days. Among the highlights you’ll see a lot about the future of medical education, patient engagement, and stories in healthcare. To paraphrase the famous Susannah Fox, if these are headlines from the future of healthcare, what are they saying?

I’m accessorized and ready to go! #MedX 2014, let’s do this! pic.twitter.com/S2vjY8ogzM

FUTURE HAS ARRIVED: Everyone who runs a medical conference should pay attn — make-up of attendees @ #MedX : pic.twitter.com/9KZdZuJreI

When it’s not a bad thing to be in the red… #MedX pic.twitter.com/FCPbv6qfVF

When asked ‘How are we preparing the next generation of doctors for the future of patient engagement?’ The audience gasps #medx

Empathy is not a luxury for physicians @DrDanSiegel #medx pic.twitter.com/OkJTOnH5kX

doctors are trained to do things “for” patients, and not “with patients” @ekeeleymoore #medx

.@joyclee: We have to bring the idea of “patient as expert” into the health-care culture. #MedX

“How did I become the primary investigator in my own healthcare?” All patients w/complex-chronic wind up asking this, don’t they? #medx

You could’ve heard a pin drop during this -> RT @GilmerHealthLaw: Thank you #medx. Full letter on @HeartSisters http://t.co/nULJULQr8a

For those who’ve been waiting – my Ignite video is out! http://t.co/SHqnuAOPf0 #MedX

So much innovation but U.S. Healthcare Ranked Dead Last Compared To 10 Other Countries http://t.co/mkgdGJfrxf via @forbes #medx

@bacigalupe @Forbes Perhaps All of This #Innovation Is Just Getting in the Way of the Patient-Provider Relationship? @StanfordMedX #MedX

So excited that @CharlesOrnstein calls out the obvious fact that all of the covers of “Top Doctor” lists are middle aged, white men. #medx

Love that “empathy” as a concept is taking center stage at #medx RT @tmlfox pic.twitter.com/KBQ4uyJKN4

Love this slide from @joyclee about allergy parents. #MedX pic.twitter.com/mjrkFTw5Ek

#MedX @warrenwiechmann: We started a pilot with Google Glass where standardized patients are wearing Glass while students interview them

“For the first time, students can see themselves through the patients’ eye” –@warrenwiechmann on using Google Glass #MedX

UCI’s app for #meded “our students did a pretty decent job of educating at the bedside” #medx pic.twitter.com/kifvUeoz5J

How do we engage more px to become #ePatients? Show them they’ll be valued, they’re not alone, this is real prob & they have solutions #medx

@nealulrich Yes. Oh, and if you want more engaged patients, then acknowledge that they are experts in their own experience. #medx

Nothing reinforces my career decisions more than #MedX. Grateful to @larrychu for bringing so many extraordinary people together to learn.

The most important thing I said today, “Be your bodies ally. It’s the only one you’ve got. Don’t make it the enemy.”

@GilmerHealthLaw You’re in my #Storify story “They don’t care that you know until they know that you care” http://t.co/TISNCIXQLa #MedX