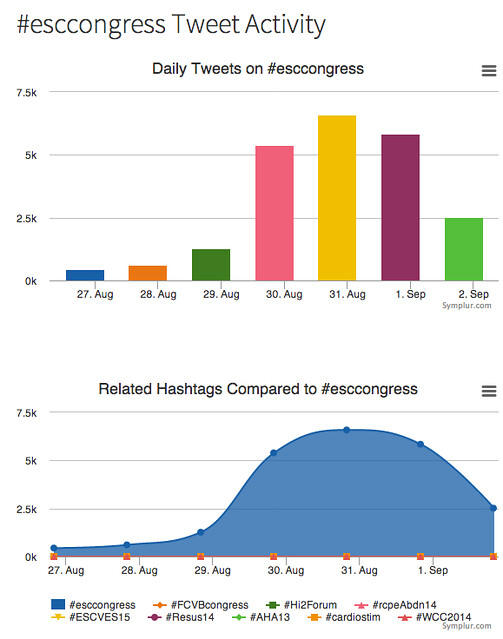 Even people who don’t use Twitter are usually aware of the Twitter backchannel at conferences. There are some big ones going on right now.

How do I find these? Partly from my Twitter stream, partly from searching, but mostly from the Symplur list.

What was probably the largest Twitter presence from a healthcare conference happened earlier this summer with the International AIDS Conference, #AIDS2014, which had almost 15,000 tweets the first day. Part of what caused the spike was the loss of so many AIDS researchers in the MH17 crash in the Ukraine as presenters tried to get to the conference. This isn’t just an idea I had, but something you can see in the tweets and their analysis. Symplur doesn’t simply serve as a tool to discover hashtags and tweets, but also provides metrics and comparisons. Here are some Twitter metrics from the AIDS2014 hashtag (you may need to click through to see the images).

Most Popular Conversation Topics from Day 1 of #AIDS2014 http://t.co/AKtfNwcroe pic.twitter.com/FZqiCRzT1U

Something that also happens on Twitter with conference hashtags are people planning to attend events, making arrangements to meet, promoting a presentation they hope will attract an audience, building up awareness and marketing. Sometimes you also get comments like this one about what NOT to do for using social media or the web for your event.

Oops. A BIG oops! Symplur has guidelines for Twitter hashtags that would make life difficult if the Big Data Science in Medicine folk try to use the URL as their hashtag, since it would probably not be allowed to be registered for archiving. It would probably also attract a lot of “unintended” and off-topic tweets.

The big healthcare conference on Twitter right now is the European Society of Cardiology, still going on today, with over 21,000 tweets and over 93 million impressions (so far). Here are just a few highlights from ESCCongress.

Tweet questions in advance for PARADIGM-HF co-PI John McMurray using #NEJMchat. We may use it during 10 AM ET Wednesday chat. #ESCCongress

#FOCUS: #polypill should be half the price of medications taken separately – Salim Yusuf #ESCcongress

Dr. Kim Fox's slides on the results of SIGNIFY are here http://t.co/94NK5aj8hs #ESCcongress

Slides on the results of ODYSSEY FH I and FH II studies here http://t.co/ffExvVPIxx #ESCcongress

You think the #esccongress center is crowded. Check out competition for space in the press room> pic.twitter.com/bvwCQthoRT