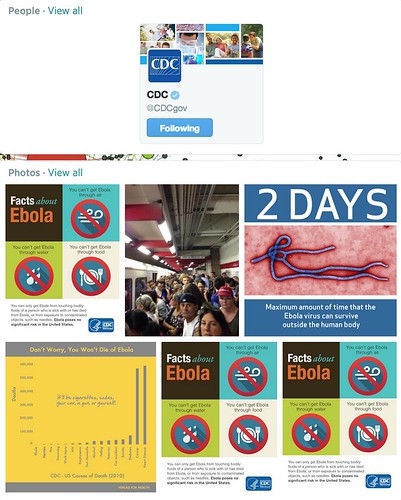 Last week, I showed you some of the ways in which the healthcare community is using Twitter to combat hype and misinformation about Ebola. This week there is a more specific example of the same idea — how the Centers for Disease Control scheduled a Twitter chat to answer questions in public for clinicians and healthcare providers about the Ebola outbreak in Africa.

There are some surprises in this collection. Some surprising questions, some surprising answers, and sometimes the surprise is in who is doing the answering. The conversation around bleach is especially interesting. Also, notice who is retweeting what the CDC says. This is a small sampling, but many many people passing along the information, and this is important for spreading the word.

#smem request: I am looking for a point of contact at the US CDC who can discuss tech response in the field to Ebola outbreak.

#Ebola doesn’t spread from people who aren’t sick. If someone has been exposed but isn’t sick, they can’t spread it to others. #CDCchat

There are currently 2 cases of Ebola in the US. And well over 1 million with #mecfs w new cases every week. High consequence patho #cdcchat

How many health care workers have been affected with #mecfs since the LA outbreaks? This disease takes lives. So much stigma #cdcchat

.@brinkc93 Unfortunately, geographic spread of #Ebola across 3 countries in hard-to-reach communities added to the problem. #CDCchat

#Ebola only infects mammals such as primates & humans. No evidence that mosquitos or other insects can become infected. #CDCchat"

I have read in your manuals 2 ratios of the bleach/water solutions: 1:100 and 1:10 Applications? * @CDCgov @GeneticSequence @EPA #CDCchat

@CDCgov. Please can someone drink the diluted bleach to kill #Ebola. #CDCchat

On surfaces and "things" NOT as a medicine 😣 “@CDCgov: .@ttskbmar Yes, 1:10 dilution of bleach will kill #Ebola. #CDCchat” Read responses💀

@fiskcg @CDCgov @ttskbmar 1:10 of what initial concentration of bleach? kinda important to know not all beach is equal #CDCchat

#Ebola #CDCchat If the expreimental vaccine ends up working and making people better, will that person now be a carrier to infect others?

"@HugoViegas: @CDCgov What should I do to all the people in the waiting room if a suspected case appears in my ER? #CDCchat" @EbolaAlert

#CDCchat can assume that pts who are coming to medical facilities in earlier stage of infection, are not risking others in public restrooms

@DrFriedenCDC #CDCchat not every MD and RN shares the passion for tropical medicine like these special doctors w.o. borders.NOT OUR BURDEN

How does @CDCgov monitor biohazard waste from #Ebola patients when it leaves hospital? Are U.S. citizens at risk of contamination? #CDCchat

“@CDCgov: Docs who have patients who are concerned about #Ebola can refer them to a Q&A from CDC on @WebMD: http://t.co/RlCGNTcQt4 #CDCchat”

Must commend @CDCgov in its efforts at risk communication of #Ebola thru #CDCchat. Tough challenges with only 140 characters.

#CDCchat Thanks, CDC, for doing this chat and doing it well. Perhaps another one in a week or so as an update?

#CDCChat Thanks for doing this, we may quibble of the guidelines etc., but your heroic efforts to stop #Ebola have not gone unnoticed

“@CDCgov: Thank you to our experts and to all of you for joining us this important discussion today! #CDCchat” Thank you for this chat!

Each week we highlight a different topic on the CDC #GlobalHealth homepage. This week's focus is #Ebola: http://t.co/y9qNB8cfJw