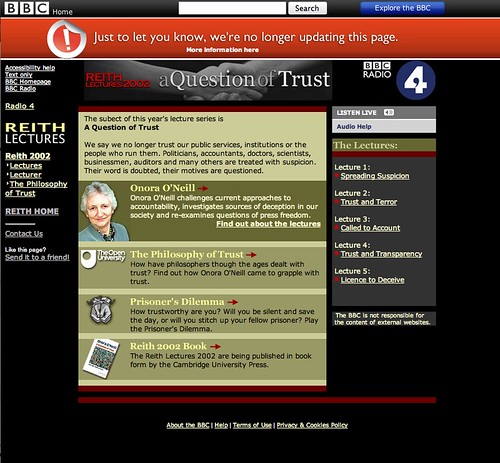 The question of trust is not a new one — who we trust, how we trust, why we trust. All of these are known to be critical in healthcare, even more so now that we have the Internet and social media. In last’s evening’s #HCSM Twitter chat, a group of patients and doctors debated portions of this question. No new answers or solutions appeared, but there were some provocative statements and perspectives.

#hcsm How could discussion on health issues, even ones own, cause burnout? Given the nonsense on some websites #hcsm can only add clarity

@RasuShrestha Many of the younger informed patients are. Majority of older > 60 are not. Guess less again in deprived areas too #hcsm

Agreed. We need to go to where our patients are… And right now, they’re on social media! #HCSM @DamianFog

@RasuShrestha So I spend a lot more time using land line phones to patients than any smartphones devices. Flexible comms is key #hcsm

@DamianFog @RasuShrestha #hcsm this is the problem I see with knee replacement and social media.

If you were starting on a new med wouldn’t you want to hear other patient experiences with it? SM makes sense. #hcsm

@She_Sugar No because if I hear only of patients who failed on med, I wont try. Better to try it, then ask. #hcsm

@OneGrenouille @She_Sugar Sample size can skew / slant info received. But there are also side effects that don’t make the pkg insert #hcsm

@OneGrenouille @pfanderson @She_Sugar I see it as part of being informed, pt exp + doc info + own research = go in eyes open #hcsm

@StevenBarley @TiffanyAndLupus Me, too. After enough years with no diagnosis, lots of meds, but none that WORKED, no answers, … #hcsm

@pfanderson @StevenBarley @TiffanyAndLupus YES. If no SoMe I’d be lost living with an obscure and rare diagnosis #hcsm

@RustyHoe @StevenBarley @TiffanyAndLupus Without SoMe and personal genomics, I might not even HAVE diagnoses #hcsm

I’d call that a great success. Congrats. MT @pfanderson:Without SoMe and personal genomics, I might not even HAVE diagnoses #hcsm

@StevenBarley @pfanderson I’m in OZ 2 of my main meds I learnt of from UK pts I met on SoMe. Not normally used here but work great #hcsm

There is assumption that HCPs KNOW, in t1 D I”d take advice from another longterm pt than a GP any day of the week. #hcsm

@pfanderson @TwiceDiabetes I’ve seen it from both sides, + i’d always take advice from my HCP #hcsm

@harriseve I so disagree, most Drs r not experts in t1 diabetes, much more misinfo from GPs than ppl w d on SM #hcsm

@JBBC @BrownEDHI Also, young people “born into SoMe” get used to disclosing every thought; inappropriate when young docs do it later #hcsm

@HeartSisters @BrownEDHI I teach older docs not to be afraid of social media, and younger docs to be a little more afraid #hcsm