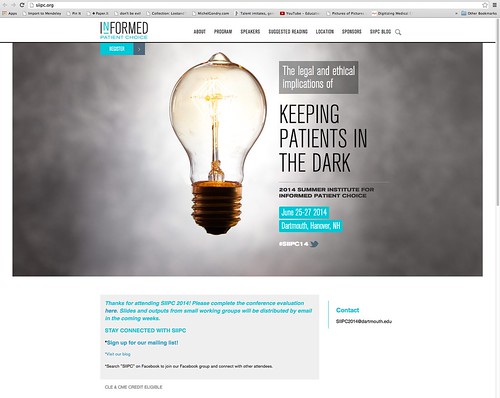 Summer Institute for Informed Patient Choice: The legal and ethical implications of keeping patients in the dark: http://siipc.org/

You shape your Twitter experience through who you choose to follow. Everything else derives from this — the tweets you see, the suggestions for people to follow, the hashtags listed as trending, all of it. For me, by far the majority of the people I follow are somehow connected to healthcare. Last week the hashtag that was vibrating through my Twitter feed was #SIIP14, which turned out to be for a biannual event on patient choice held at Dartmouth College. From what I was seeing, it sure looked as if they had some exceptional speakers and great conversations. There was also ONE particular tweet and slide that seemed to sum up the most important thoughts of the conference, on how to tell the difference between “informed consent” and “shared decision making.” Trust me, if the image doesn’t show up in the embedded tweet below, you really need to click through and see this one.

The discussion centered around that one tweet was rather insightful, especially with respect to how “informed consent” may be perceived by actual patients. Here are just a few selections (excluding some of the strong language that accompanied people’s passionate responses).

@ePatientDave @C7RKY yes thankyou. Give me options I MAKE the decision and its my decision alone to make am not sharing it with anyone.

@helliewm @C7RKY Right – "give me options" is the opposite of "I decided what you're going to get – here, sign this consent." Exactly.

@helliewm @ePatientDave Same people who regard consent as an annoying inconvenience to be overcome, before doing whatever they wanted anyway

@ePatientDave @CancerGeek does the legal profession recognize the difference? Until it does, it's a bit.

@ePatientDave @helliewm how many patients 'ask?'How can you ask for something you don't know about? Who holds info in pt/doc relationship?

That side conversation is, however, only part of the exceptional thoughts that circulated through #SIIPC14. Historic context, overdiagnosis, the child’s view of the doctor, unwanted surgeries, access to information and research articles, respecting the accommodation needs of patients who attend healthcare events (and when is the doctor a patient?), with much more.

A child’s drawing reveals the doctor in the era of laptops in the exam room #SIIPC14 [Toll JAMA 2012] pic.twitter.com/dTi5M0DbUb

Note – in this image, the doctor is the one with their back to the rest of the room, typing away furiously on the computer.

ABOUT INFORMED CONSENT IN SURGERY

@MightyCasey @DanCollisonMD How is it possible someone was operated on & they didn't want surgery? Unconscious? Informed Consent? #SIIPC14

@ElinSilveous @DanCollisonMD Patient not fully informed of all treatment options, had they been they woulda said, "No thanks." #siipc14

@GeriLynn: Dr John Wennberg at #siipc14 : when given a decision aid, only 15% of clinically eligible patients opted for knee surgery #sdm

Jack Wennberg: the good, the bad, and the unwarranted variation in tonsillectomy in 1936 #SIIPC14 pic.twitter.com/yA88Vra9fh

Now-classic study of disconnect between patient preferences re mastectomy and what clinicians THOUGHT pts want pic.twitter.com/Q9ClhisNJf

@ePatientDave @ractho @eCMIO When I brought Medline to the public in 1995 NLM said "it would be too frightening for ppl." Bull! #SIIPC14

Hey #SIIPC14 it's a bit brutal to go 4.5 hours without a break. (Even tho, as Glyn says, we can refresh on the sides.) #justsayin

@ePatientDave I agree with you- one of the main reasons I didn't go this year to #SIIPC14 I have OA and need to move often.

Shared decision making is wonderful idea but unless we move to universal health care, it is just a dream for the privileged. #siipc14

When to see a patient again is one of the most important questions for a primary care physician. Elliott Fisher @ #siipc14

Medical incentive system should be 'no outcome, no income'. @ElliottFisher4 #SIIPC14