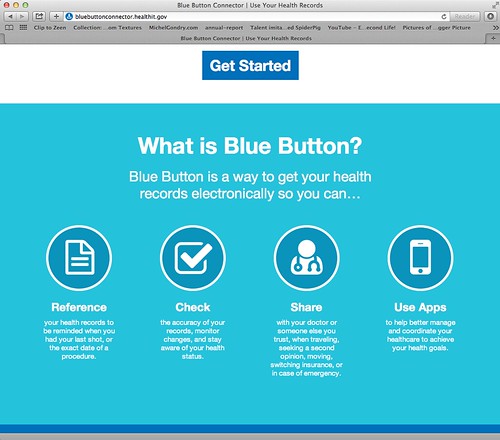 The Blue Button was some of the biggest buzz at Health Data Palooza. Following #hdpalooza, the Office of the National Coordinator for Health Information Technology partnered with the famous and popular media personality, Dr. Oz through his affiliated service, ShareCare, to co-sponsor a Twitter chat about the Blue Button and what it can do for the American people. For those who haven’t already heard, the Blue Button is a tool for accessing your personal health records.

I’m taking this opportunity to also show you some special Twitter search features and how they work. Today, I’ll cluster the examples by type of search, and in Part 2, I’ll show how to do these special searches.

Millions of Americans can get easy, secure online access to their health records thanks to #BlueButton http://t.co/MdI4c31aou

Let's be a little bit more clear about HIPAA here. Patients are NOT restricted by HIPAA in accessing their data. #bluebutton

#BlueButton uses the same security standards which are used to send secure e-mails, and secure credit card transactions on the Internet.

65% of Americans who don't have access to their health data want it: [INFOGRAPHIC]: http://t.co/4c6f1SJIqa #bluebutton #hdpalooza

This is what #BlueButton looks like! So check your patient portals online to see if your health org participates. pic.twitter.com/8KstcQPvgc