Have you heard the buzz about the “Post-MDG Era” in global development? For example, the theme for the 2014 Consortium of Universities for Global Health (CUGH) is “Universities 2.0: Advancing the Global Health Agenda in the Post-MDG Era.” But what exactly does this mean?

To begin with, the current set of 8 Millennium Development Goals (MDGs) originated from a pledge made in 2000 by 189 nations to, “free people from extreme poverty and multiple deprivations.” With an explicitly global scope, the United Nations Millennium Declaration outlined guiding principles for an ambitious international development agenda between 2000 and 2015. The process of creating the MDGs also importantly also secured funding commitments for the proposed programs to promote peace, environmental health and good governance, to eradicate poverty, and to promote health and education worldwide, especially for the most vulnerable in society.

Now, after thirteen years of enthusiasm, hope, optimism and hard work to create and implement the MDG-related programs and institutions, we are at a point of reflection upon the successes and failures, and of looking forward to the “Post-MDG” era. This September, after thirteen years of work and evaluation of the MDGs, discussions among decision-makers and stakeholders worldwide began on the post-2015 MDG era. The Task Team on Post-2015 UN Development Agenda, brought “together senior experts from over 50 UN entities and international organi­zations to provide system-wide support to the post-2015 consultation process, including analytical input, expertise and outreach.” This Task Team will be supporting and advising the Open Working Group (OWG) comprised of 70 nation-state members. The OWG reports between now and September 2014 will shape the eventual adoption of the new iteration of the MDGs: the SDGs (Sustainable Development Goals).

To appreciate the 2015 transition to the SDGs, it is important first to understand the ambitious and varied scope of the current MDGs.To equip students, faculty and researchers at the University of Michigan interested in (or currently working on)  international development projects with MDG information resources, the Taubman Health Sciences Library has created a new, online resource: the Millennium Development Goals Research Guide. 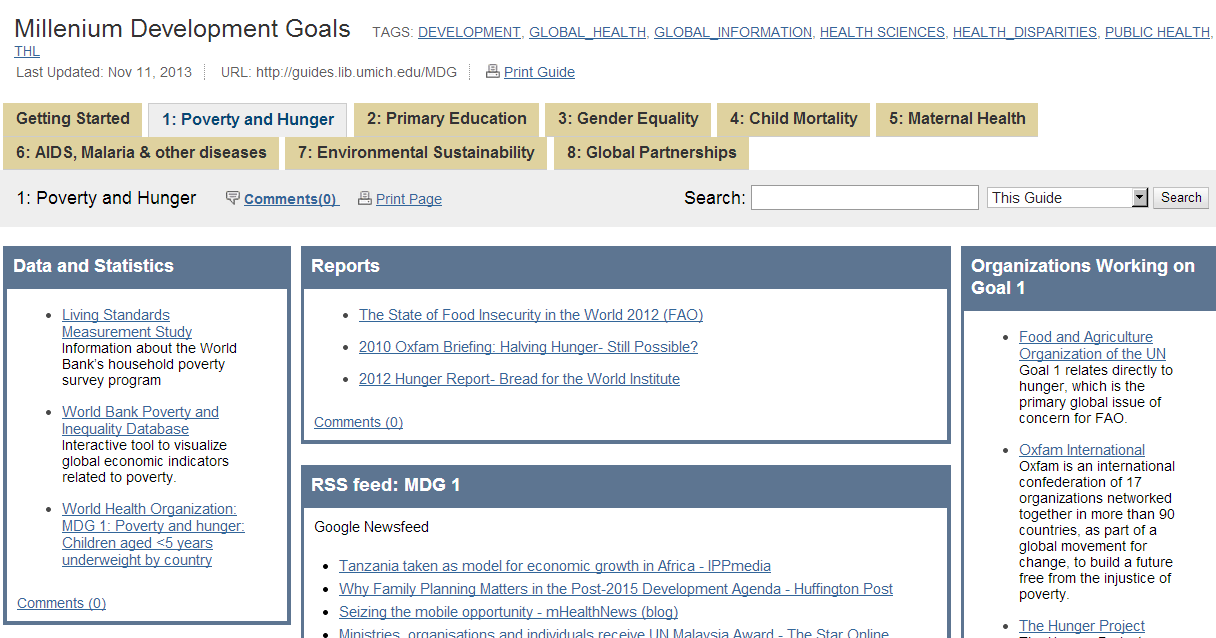 Within, you can find information resources curated and organized for each goal, and a combination of open-access reports, data and major organizations contributing to each goal, in addition to academic databases and scholarly resources available only to U-M affiliates. This specialized, open-access tool is applicable to a wide range of internationally-focused disciplines, and can help users to participate in research and analysis of projects moving into the post-MDG era.

View all posts by alyssamouton